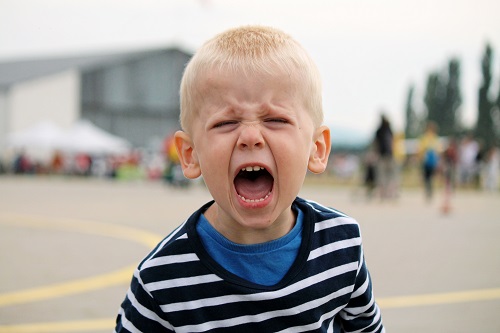 As a parent, one of the hardest things to deal with is when your child has a temper tantrum. With a 2 or 3-year-old, if you’re lucky, other parents may nod and smile at you and say, ‘Ah the terrible twos’ or ‘Oh yes, I had a threenager too!’ If you’re unlucky you will be around people that haven’t got small children, maybe in a shopping centre or on a bus or train and you will see people staring at you and you will feel very judged. I know because I’ve been there. There is nothing worse than trying to keep your child quiet because other people think that children should behave in public places. It’s even worse when your child isn’t 2 or 3 but is much older and people think they should not be having temper tantrums anymore.

The other day we were at our lovely gym and my 7-year-old son was knocking around on the tennis courts with his friends. His teacher had cancelled the lesson that day so the kids were just there to practice and have fun. They were playing doubles when the ball came onto my son’s side and he and his partner both missed it because it went right down the centre between them. I laughed – I play tennis too and that happens to me all the time! He didn’t see the funny side and broke down in tears. I chatted to him and thought he was OK, but he was soon screaming and shouting and I had to take him out of the courts into the corridor where people were walking past! I was absolutely mortified – my friends were there, hearing my 7-year-old have a meltdown and perfect strangers, or people I nod to at the gym were witnessing this! I didn’t think I had a hope of getting my son to calm down and go back on court to play.

So, what do we do when our child is in the middle of a full-blown meltdown? It doesn’t matter if they are 2, or 10, the answer is the same. Our job as a parent is to stay calm and try to understand why they are feeling this way – what is the emotion that has driven them to this point. With my 2-year-old it is often that her tights don’t feel right, or that she doesn’t want to wear a particular coat – these are strong feelings to her! With my older son, the emotions are getting more complicated.

I realised that I wasn’t going to be able to calm my son down without showing him that I understood these feelings. So, when I told him that I imagined he felt it was very unfair that we thought he had missed the ball, he immediately softened and said yes, because it had bounced on his partner’s side of the line. As I went on, and said, and I also think that you are feeling anxious because of the loud noises that the machines on the other tennis courts are making, don’t you? (They were refitting the lights that day in the indoor courts and there were cranes that were making very loud beeping noises as they went up and down!). I know you were frightened by the loud noises when we came in. Once I said this, he crashed down into my lap and just wanted to be held.

I know my son very well now. It has taken me a long time to realise what a highly sensitive boy he is and how anxious he gets about noises and situations. But now that I do, it makes it much easier for me to identify why he has a meltdown about something that seems to be so small.

Our job as a parent is to be curious about our children’s emotions. To try to understand the feeling that is causing them to act in a way that we don’t think is appropriate and to redirect that. By imagining what my son was feeling, and voicing it, I helped him let go of his anxiety and after a short while he went back to play tennis with his friends.

I wondered about what to do then. I felt he needed to make amends for his behaviour. I pondered over this for a good while. And then I realised, that in going back to play tennis, he had overcome a huge embarrassment – he was reluctant to go back onto the court – and that this was enough for today.

It was so clear to me that it was his anxiety that had caused the meltdown as when we were having our picnic tea with the other kids after tennis, he said he had a tummy ache. This is a huge signal to me that he is bound up with anxiety as very often a tummy ache does mean a child is worried about something. When I explained this to him, and got him to do some deep breathing with me, his tummy ache went and he could keep eating and play with his friends.

When the situation had calmed down and we were back home later that evening, I had a long chat with him and we discussed strategies he could use in future if he was feeling anxious or that things were unfair. He also said that Mondays are a really bad day for him as it’s the beginning of the week and a long time until the weekend. That is something I can hold onto and remember as I try to help him again. If you show your child you understand their feelings they will often explain a bit more about how they are feeling to you.

These skills can be applied to a child of any age – from 2 to 52! And if you would like to learn more about emotion coaching please do sign up for one of my courses at https://www.assuredparenting.co.uk